Genetic improvement of dairy cattle would increases benefits of dairy farmers. The size of Holstein cow population has substantially increased over the recent years in Tunisia through the importation of cattle and semen from developed countries (USA, the Netherlands, and Germany). Hammami et al. (2007) and Ben Zaabza al. (2016) reported that 60% of all inseminations of dairy cows in Tunisia used Holstein semen. Recently, more attention has been given and placed on milk quality traits in breeding programmes. Estimates of genetic parameters for milk yield in dairy cows are abundant in the literature (Hammami et al., 2008a, 2009a, Ben Gara et al., 2006, 2012; Ilahi et al., 2012). However, investigation of genetic parameters of milk quality traits is lacking. Cows enrolled in the A4 official milk recording system since the 1960s, were about 10% of the total Holstein population in 2000 (Rekik et al., 2003). Alternate and owner farm recording systems are being highly encouraged to increase the number of Holstein cows enrolled in the national milk recording system. The data generated by the milk recording system is not sufficiently and not adequately used and valorized as well, especially because of lack of genetic evaluation (Hammami et al., 2008b).

In farm animal populations, large sizes of phenotypic observations/records are often available at low costs and it is worthwhile to use them to look for statistical evidence of major genes or quantitative trait loci (QTL) by statistical analysis.

Segregation analysis is the most powerful statistical method to identify a single gene when DNA marker information is unavailable. With segregation analysis, it is possible to determine, using only phenotypic data sets, whether the inheritance of a certain trait is controlled, at least in part, by a single gene with a large effect. Therefore, the existence of major genes has been investigated in several different studies in livestock species: Janss et al. (1995) for various traits of Dutch Meishan crossbreds; Ilahi (1999) and Ilahi et al. (2000) for milking speed in dairy goats; Pan et al. (2001) for somatic cell scores in dairy cattle; Hagger et al. (2004) for selection response in laying hens; Ilahi and Kadarmideen (2004) for milk flow in dairy cattle; Ilahi and Othmane (2011a, b) for milk yield in dairy sheep; Ilahi et al. (2012) for milk yield in dairy cattle.

Segregation analysis using pedigreed animal populations is impossible by analytical approaches due to the existence of many (inbreeding) loops and due to the family sizes, which do not allow to sum and integrate out genotypes and polygenic effects from the likelihood or posterior density. This problem has been simplified by the development of Gibbs sampling, a Monte Carlo Markov chain (MCMC) methodology (Guo and Thompson, 1992) and its applications to livestock populations by Sorensen et al. (1994), Janss et al. (1995), Janss et al. (1997), and Ilahi and Kadarmideen (2004).

Data were provided by the Tunisian Genetic Improvement Center, Livestock and Pasture Office, Tunis. Original data from the official recording database were recorded between 2005 and 2017 in 118 dairy herds located in north of Tunisia. After editing on the herd size (≥ 5 records), and records only that included fat and protein contents were retained. Cows without pedigree information were discarded. Finally, data set included 15 343 records of 5 881 first parity from 5 042 cows for fat (35.38 g/kg ± 3.80) and protein (36.00 g/kg ± 3.98) contents were used for genetic analysis. Pedigree was traced as far back as possible and all pedigree information available was included in the analyses. Thus, the pedigree included 15 171 animals with 1 048 different sires.

To estimate variance components and to investigate the presence of a major gene for fat and protein contents in Holstein dairy cows, the following mixed inheritance single trait model was used:

The major gene was modelled as an additive autosomal biallelic (A and B) locus with Mendelian transmission probabilities. Allele A is defined to decrease the phenotypic value and allele B is defined to increase the phenotypic value (or favourable allele). With these two alleles A and B, with frequencies p and q = 1 − p where p is the estimate of A allele frequency in the founder population in which the Hardy-Weinberg equilibrium was assumed, three genotypes AA, AB or BA and BB can be encountered, with genotype means m = (−a, 0, a), where a is the additive major gene effect.
Distributional assumptions for polygenic effects were,  where A is the numerator relationship matrix. The distribution of the permanent environmental effects were, Residual effects were assumed to be distributed as and are polygenic, permanent environmental and residual variances, respectively. The relationship matrix of the full pedigree A was used in the analyses. The variance attributable to the major gene  was calculated as:
Uniform prior distributions were assumed in the range (−∞, +∞) for non-genetic effects and effects at the major locus, in the range (0, +∞) for variance components, and in the range [0, 1] for allele frequencies (Janss et al. 1995).
Gibbs sampling algorithm with blocked sampling of genotypes W was used for inference in the mixed inheritance model and implemented using the ‘iBay’ software package version 1.46 developed by (Janss 2008).
A single run of the Monte Carlo Markov Chains (MCMC) consisted of 620 000 Gibbs samples, with the first 20 000 samples used for burn-in period to allow the Gibbs chains to reach equilibrium. Thereafter each 20th was collected to obtain 30 000 Gibbs samples in total.
From the mixed general model, marginal posterior densities of the following parameters were directly estimated in each Gibbs cycle: variance components  and additive effect at the major gene a, allele frequency p, and the Mendelian transmission probabilities. Using variance components for polygenes and major genes, following Janss (2008), the heritabilities and repeatabilities were computed as:
For heritability and repeatability:
For total heritability and repeatability:
Polygenic Model
The objective of fitting a polygenic model to analyse again this data was to obtain genetic parameter estimates of fat and protein contents in Tunisian Holstein dairy cows, and to compare them with those obtained using the mixed inheritance model, to check the mode of inheritance (genetic determinism) of these both analysed traits.
Based on the same statistical model used in mixed inheritance analysis described above, the variance components under a polygenic model of fat and protein contents were estimated by Bayesian analysis, using the ‘iBay’ software package version 1.46 as well (Janss, 2008).

Marginal posterior means and standard deviations of parameters estimates of fat and protein contents using Bayesian segregation analyses implemented by Gibbs sampling are shown in Tables 2 and 3. These estimates are based on 600 000 Gibbs samples. Posterior marginal distributions of all variance components of both traits are presented in Figures 1 and 2.

Table 3, shows the three estimated posterior means of Mendelian transmission probabilities were not significantly different, and as well their highest posterior density regions at 95% (HPDs95%) for the three genotypes were overlapped. Furthermore, the density of marginal posterior distribution for the major gene variances as shown Figure 1 and 2 were unimodal marginal density with mode = 0, suggested the absence of a major gene for both analysed traits (Janss et al., 1995; Pan et al., 2001).

The mode of inheritance and genetic parameters of fat and protein contents in Tunisian Holstein dairy cows were investigated and estimated under mixed inheritance and polygenic single trait models via Gibbs sampling. The finding of this paper showed no existence of major gene and the genetic determinism of fat and protein contents is purely polygenic.

Estimates of genetic parameters of both traits were generally lower than those commonly reported in the literature, which may be due to limited production level of Tunisian dairy cattle populations, and the incomplete pedigree information on the fitted data. 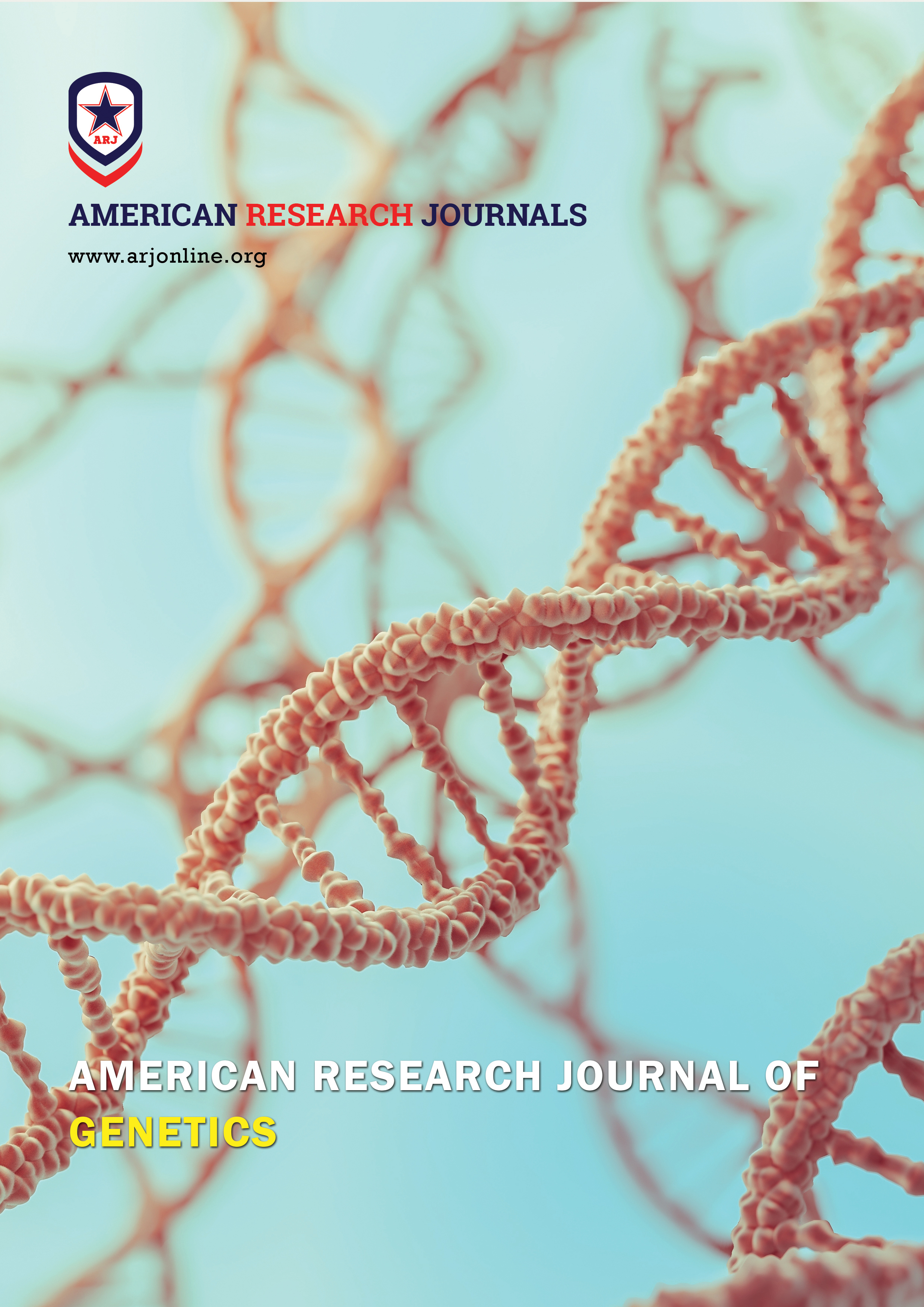